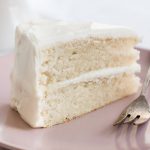 I highly recommend sticking to the recipe. Using butter and sour cream is what makes this recipe so good. It's best if all the ingredients (eggs, milk, sour cream) are at room temperature, but make sure to separate the eggs while they are still cold because it's easier. If you don't have a stand mixer, use a hand mixer. I recommend lining the bottom of the cake pan with parchment paper to ensure that the cakes come out of the pan in one piece. I cut parchment paper rounds the size of the pan.