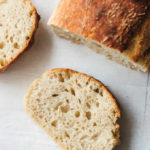 This recipe uses the Dutch oven/heavy pot method, but it’s possible to bake the bread in a loaf pan or a baking sheet instead. Read above post for more info.